I live close by several major tourist attractions, and every time I take the subway, I can guarantee you, there will be tourists either going uphill or downtown. What makes them stand out, besides the foreign languages, is that they always seat themselves on the side of the subway where you can see all over town. And they take photos. A lot. Which made we wonder. When was the last time I actually took a camera with me and took photos of my town? I mean, I live in the Capital; crying out loud. There are plenty (!!) of pretty things to discover and take photos of. Why should only the tourists experience the city like this?

Therefore, a couple of weeks ago, on a beautiful, sunny Sunday, BF and I went for a walk downtown. And this time I brought my camera with me. At first it felt a bit odd, taking pictures of everything, but then I thought about the social media world we live in today, so I figured, why should I be bothered if anyone thinks I`m an obsessive Instagrammer (I´m not), or that I`m a blogger (which I am. But only one person in my real life knows about it). Anyway, where was I? Oh yes. I took out my camera when we got to the Royal Palace, thought it`d be an easy transition, you know, all the tourists and me. And then I stopped caring, and started taking pictures.

The Royal Palace where the King and the Queen reside, but during summer it`s open for the public through guided tours. A statue of the Norwegian&Swedish King Carl Johan, by which the street leading down from the castle and all the way down to the central station is named after. The inscription says: “the people`s love, my reward”. 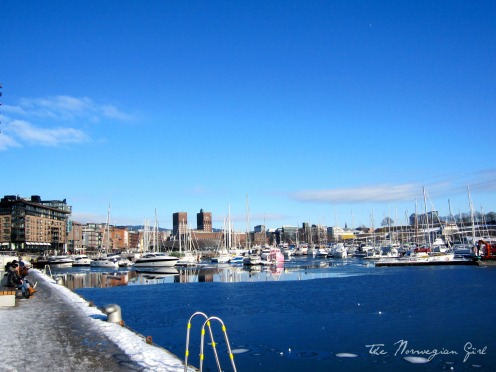 Aker Brygge. A very popular place during spring and summer. They sell the best ice-cream there! There are green areas where people can have a picnic, and children can play. The latest thing is a small beach!

And as a special treat for all you American readers, here`s what looked like a very random statue of Franklin D. Roosevelt. I did google it, and it turns out, during the WW2, the president had a speech called Look to Norway. A very inspirational speech for all resistance fighters in Europe. So we put up a statue as thanks! 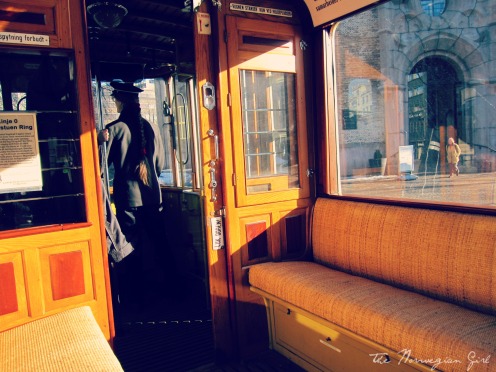 While walking towards the central station, we discovered that the old tram was in use for the day, so I just had to hop on. The tram is from 1913, and they usually take it out for a spin on Sundays. Such a great experience. Not much has changed, other than the tram driver was a woman. Don`t think that would`ve been allowed in 1913! 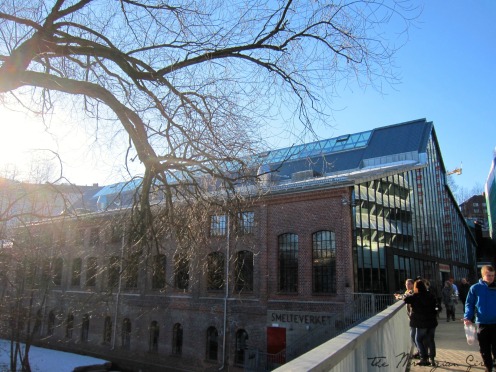 The last thing we did was go uptown to an area called Grünerløkka, where the Food Market can be found. This area was previously an industrial area of the city, but is now where all the hipsters hang around. Compared to markets in other European countries, the Food Market is very dissappointing. It`s crazy expensive, and mostly just exists of small dining areas. Not the place for a poor student trying to make her ends meet. But it was a fun experience. And it does smell lovely in there!!

I thought I`d end this tour today with a funny building you can find next to the Food Market. It`s a former grain silo turned into student housing! Genious right? Though, I`ve heard it`s hard to decorate with all the walls being rounded…

So whether you live in a big city, a small town or in the country, when was the last time you actually stopped, looked around and “smelled the roses”? In the busy everyday you can easily forget that the place you live might actually be worth (re)discovering. Oslo can be  ugly and scary, but also peaceful and beautiful, it`s all in the eye of the beholder. So here`s my challenge to you. Go explore your neighbourhood.  And bring a camera, you never know when you gonna need it!

If you blog about it, let me know, and I`ll link you up on my blog! I`d love to see some other parts of the world rediscovered!

And then the weekend was over and monday is a fact! I hope everyone had a great weekend and that you don`t have too much of the Monday blues. I know Mondays can come as a shock sometimes, especially after those weekends filled with activites from sunrise to sunset. My weekend was one of those.

I came home from my winter break on Thursday evening, and was met by BF on the train station, who surprised me with having invited our friends over for dinner the next day. I love having dinner parties, especially casual ones, so of course I was up to it. So on Friday I went grocery shopping, and then spent the remaining day before the dinner, baking portion bread (we were all out), tortillas for dinner and delish Chocolate Cupcakes for dessert. We had tacos for dinner. A super easy and yummy dinner that`s perfect for a casual evening with friends! And they loved it!

On Saturday I had to get up way to early than what I´m used to, as we were heading over to my BF`s sister. She and her man are selling their apartment and building a house of their own, so they needed some help to paint the apartment so it`d look good for future buyers. And that`s all that happened really. I painted, and painted and then painted some more for about 6 hours.. I was pretty tired of white paint by the end of the day. But hey, 6 people did manage to paint an entire 2-bedroom apartment on one day!!

When I woke up on Sunday, I was supposed to spend the day inside, studying. But just one look out of the window, and Change of Plans! It was such a beautiful day, so we hopped on the subway and went walking for hours downtown, and I had brought my camera with, so I went all touristy and took pictures of everything! Such as our beautiful Royal Palace!

How was your weekend? Did you do anything special?

Error: Twitter did not respond. Please wait a few minutes and refresh this page.